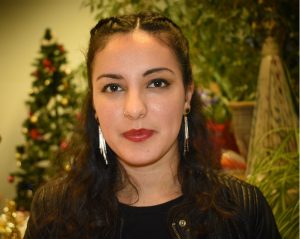 In late January Great Britain released a draft for a new domestic abuse bill, recognizing economic control as a part of domestic abuse. Though this is a huge step for women’s rights, the bill falls short to protect migrant women. We talked to Illary Valenzuela, Policy and Communications Coordinator of Latin American Women’s Rights Service (LAWRS), about the difficult situations migrant women are facing.

Illary came to the UK at a time when there has been increasing migration of Latin American women because of the economic crisis.

In my case, I came to study at university, and I got in touch with the Latin American community.

The service is a feminist and human rights organization addressing Latin American migrant women, who are one of the fastest growing ethnic minorities in the UK. Founded in 1983, LAWRS is still following the mission to empower women and bring social change. They support thousands of women each year.

All around Europe society is growing more hostile towards people with insecure immigration status. “What we see is that migrant women are facing increasing abuse and situations of gender-based violence in every area of life. At LAWRS migrant women have highlighted these inequalities when experiencing situations of exploitation and precarious labor conditions in the cleaning and care sectors, this is also manifested at home as insecure immigration status is used as a tool of abuse by perpetrators of violence as a mean to control and coerce victims.”

Their latest campaign, “Step up Migrant Women,” is born from the need for migrant women’s voices to challenge the policies that affect them.

As a migrant-led organization, the inclusion of safer reporting mechanisms at police practice for victims of crime with insecure migration status has been at the core of our campaigning for women’s rights. Migrant women should be at the center of the discussion when we talk generally about women’s rights.

The campaign started in 2017, by now over 36 organizations across the UK stand together to defend and protect all women’s rights to live free of violence. “This campaign is led by women with insecure migration statuses such as dependent visas and temporary visas, those who are undocumented and women who have been targeted by the government and policies not only for being a migrant but also for being perceived as a migrant.”

Is there enough done from public and governmental side to protect migrant women?

Migrant women’s rights have been made invisible in the UK’s current policies. At this very moment, migrant women facing violence can’t access safety, care, and justice, because of the prioritization of immigration control in all areas of society.

There have been numerous cases of women and their children going into police stations or social services to report abusive partners, to find out that those are not spaces of protection, but interrogation centers for immigration enforcement purposes. Centers which disbelieve their accounts of violence and rather target the women as migrants and question their right to live in the country.

This same practices at victim support services (such as the Police, social services, the National Health Service, and every other institution of society) are a reflection of the ‘hostile environment’ instilled on migrants. In compliance with the Istanbul Convention, signed and in the process to be ratified by the UK, laws should ensure there is equal treatment to survivors regardless of race and immigration status.

The domestic abuse bill introduced by the end of January but it is falling short to protect migrant women, though it was introduced to make the situation better.

Whilst the bill recognizes the campaign’s call for policies to understand experiences of migrant victims in the Criminal Justice System, it continues to leave migrant women behind with no protection. The bill lacks adequate support or routes to regularise their status to break free from violence—so there’s more to do. And of course, the establishment of a firewall between immigration enforcement and support services cannot go unseparated from migrant women’s rights.

The other issue is how BME (black and ethnic minority) organizations are not funded properly. Migrant women are in need to access adequate and holistic support, cuts in legal aid and specialized services have supposed more women are at risk of destitution and even femicide. Organizations in the Step Up Migrant Women coalition call to ring-fence national funding and ensure refuge provision becomes a statutory obligation for all women regardless of immigration status.

What you say is, it is basically against the basic human rights of a person. They are not protected here.

The UK is set as an example of human and women’s rights, however, we continue to see anti-migrant policies that completely exclude a large proportion of the population. Migrant women progressively have been treated as a second class citizen. Unless we talk about the basic rights women are entitled to, regardless of the immigration status, regardless of nationality and faith, we are bound to continue to the same erosion of all our human rights.

Seeing the police, social workers and GPs exert the role of immigration officers indicates a violation of institutions’ human rights ‘duty to care’ to support victims as mentioned in the Human Rights Act (1998). We are living in a system where immigration control is normalized.

You are proposing a solution on your website. A safe secure reporting system. How would this work?

At the moment there is a lack of safe reporting. Migrant women who experience abuse are being detained and deported when they report it to authorities.

They are told they have no rights in the country. They fear their children will be taken away. There is also a lack of information about what to do, what our rights as migrant women are. We are being misinformed by relying on institutions to support us, but see an increasing number of women victims in detention centers or being deported.

A migrant women campaigner at Step Up Migrant Women who experienced domestic violence by her British ex-partner was refused support by the police in 2017, because of her migration status. She was instantly made destitute, and as a result of this, was separated from her children.

Like this account, migrant women are calling for a safe reporting system, where no woman is questioned when she comes forward to report abuse, where no woman is refused support, care or justice for her and her children. For this, we believe a firewall is needed. That means, there should be no data sharing of personal data of victims of crime between immigration enforcement and victim support services.

What can individuals do to get aware and raise awareness and support your organization and migrant women worldwide?

What we are asking for at the moment is that we see this as a problem for all and an attack to all our rights. A system that supports discriminatory practices which deny access to care to some women is not a system we should support.  Step Up Migrant Women, is a stance for justice because an attack to a migrant woman’s right to feel safe is an attack to all women’s rights.