Interview with Farzane Zamen, musician from Iran, living in Glasgow 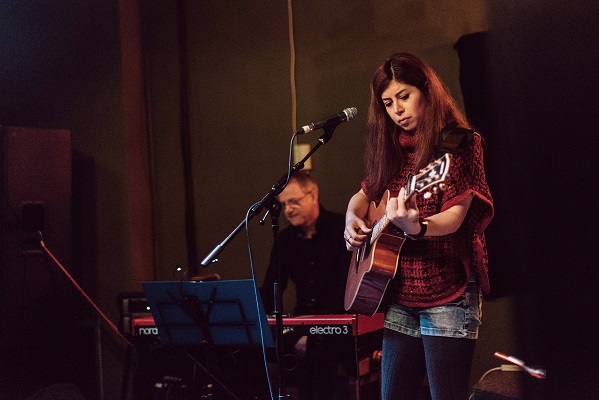 I have always been fascinated by music sung in languages I don´t speak. As a person who relies on words, who works with words and listens to English songs because of the lyrics rather than the music, it is a different journey to listen to words I don´t know and feel my focus shift to listening to the emotion a voice carries. Music is universal, they say. Music is universal because it does not need the words to tell us a story about life and love and pain. A song is an emotional journey and emotions are truly universal. No matter where we come from, what we believe in, how we live our life, every single one of us knows love and happiness, loss and sadness.

I came across the song “Bavar Be Farda” by chance a few months back and, touched by the clear and beautiful voice of Farzane Zamen, and the raw emotion, put it on repeat. To me, it was telling a story about fragile hope and broken promises. Little did I know that it was about a city, Tehran, Farzane´s hometown.

While I´m writing the article, the number of dead protestors in Iran is rising and most people in the so-called Western World have heard about the ongoing protests, the internet shutdown and the violence in Iran.

The current protests began November 15th as an answer to the increase in gasoline prizes. With the help of social media the protests has spanned over 20 cities. What began as a peaceful gathering has ended with increasing violence and government shutdown of the internet. Iran continues to be in a state of unrest and the future is unclear. Political leaders around the world have largely remained silent and the lack of news coverage has concealed the true number of casualties. There has been at least 180 reported deaths but the number is likely much higher. The bodies are confiscated and families are prohibited from mourning their loved ones or speaking to the media.

Though Farzane is not living in Iran, she is concerned about the recent developments in her home country. She has settled down in Glasgow to pursue a career as musician. People like Farzane are inspiring in so many ways. Not only do they allow us a glimpse into lives that are much different from the privileged ones we are living, they are also evidence of how a strong will and creative passion can pave the path for change. Her creativity and strength has allowed her to express herself despite the oppression she and many women face.

Lacuna: I read in an interview with you that you don´t believe change for your country is possible.

Farzane: There’s always been social changes in Iran, generations one after another got more liberal and open minded and highly educated. The problem is the political change that is what I’m not hopeful about.

At the moment while I’m talking to you the biggest protests are happening in Iran, confronted with the harshest violence by the regime’s guards plus the internet blackout all over the country. I should say YES, I think differently now and I believe our country is facing huge changes in the future! The sad thing is I don’t know if this will be in a bad way or good way. Unfortunately, many of the mainstream news channels have been cooperating with the Islamic regime to censor our Nation with not covering it. So it makes me a little scared as it seems many powerful countries are supporting Ayatollahs in Iran.

Lacuna: What do you remember about growing up as a girl and becoming a woman in Iran?

Farzane: Growing up as a girl and becoming a woman in Iran is one of the most difficult things in the world! It’s a complicated life! Schools were so tough for us, wearing Islamic dress code from the beginning of it, being humiliated because of simple and ridiculous things, like why did we have nail polish, why were our socks white, why weren’t our dress long enough and much more… Let alone the pressure from society because of the regime’s propaganda against women. I think Iranian women are one of the strongest in the world. They are highly educated and very successful in their lives despite all the things they’ve been through.

Lacuna: In Iran singing solo on stage is prohibited for women – tell us about life as a female underground musician.

Farzane: I was too much in love with music that I couldn’t see the barriers in the beginning of my musical journey, I kept working and writing and recording and as soon as I had materials to be published I felt like I hit a huge wall! Yes, I did publish my songs through online music services because that was the only option. But when you keep doing only this for years it’s a disappointment. You don’t get paid, there is no access to proper promotion channels, you get eaten by the mainstream male-dominated corrupt music industry published by the so-called ministry of culture inside Iran and you can’t find the right people to listen to your music. It’s easy to lose hope. But I kept going because I love it.

Lacuna: We often don´t know, when younger, those other places are different. When did you first get truly aware of artistic freedom abroad?

Farzane: I knew about the freedom abroad from the very early years of my life. Like from watching cartoons and movies, it wasn’t difficult to notice there is a normal life happening out there. After the revolution many pop artists left the country mostly for US and specifically L.A. After the war, from the late 80’s until the mid 90’s, the main source of entertainment was an annual music show published by Iranian Artists in Los Angeles. It was held for our new year which is at the beginning of the spring. As a kid, I clearly knew that this was from outside of the country. We had to sneak the videotapes from our friends and neighbors, as the video player itself was banned in that period of time to keep people away from even that tiny bit of happiness!

Lacuna: Your first video release “Khodahafez” focused on how leaving Iran and seeing the freedom in other countries can make one learn how to live again. It became a hit in Iran and spoke to many people who wish for change. Tell us more about the meaning of the song and the effect it had on people and on you while writing.

Farzane: Living in a country without your human rights being respected, even the basic ones is tough! I wrote this song to talk about a generation’s desire to leave the country with a broken heart to see if they can make a new life in freedom in a new country! This song impressed a lot of Iranians living abroad, they could feel this song. I was in Iran when I wrote this song, many of the people who knew me thought I had left the country, but I hadn’t!

Lacuna: Personally, I love Bavar Be Farda. The lyrics can be interpreted in different ways: the lack of real connection between people, social criticism and a sad look onto your home country. What is your intention to express with the song and what inspired you to it?

Farzane: I remember I was in a taxi going to work one day and the radio was on, the host was saying with fake happiness in her voice how a lovely and happy morning it was! I looked at the people sitting in the same car with no sign of happiness in their faces! I said to myself, one day I’d write a song about this, and I did a few years later. I like this song more than other songs of mine. It’s how I see my hometown Tehran.

Lacuna: You gather songs that you know from your childhood, songs in Farsi, songs that are a part of the heritage of your family. Tell me about this journey into earlier years of your life, into your family´s and country´s past.

Farzane: When I was a child, I listened to my father’s tapes, mostly from before the revolution. He had a lot of them; they were Persian 70’s songs, still my favorite ones between all other Iranian music genres, because it’s the only way I can feel the freedom we had before the revolution. When I was a teenager we had an analogue satellite for Turk Sat and I used to appreciate Turkish pop music which I still do. It’s interesting; it’s like your favorite music from your childhood and teenage years stay your favorite forever! I never listened to Azerbaijani music that much, but it was part of my cultural heritage. I started appreciating it since I came to Glasgow, especially after my show at the Celtic Connection Festival in which I sang Iranian folk songs and I realized I’ve been neglecting folk songs of Azerbaijan.

Lacuna: You are now living in Glasgow but grew up and spend most of your life in Iran, your home country. How does living in two different countries and two different cultures affect your music?

Farzane: I should say living in a new country with different culture makes you a different person, not only artistically, you just change. In two years, which is not a long time, I have changed a lot. The way I look to life has been changed; the meaning of being an artist has changed as well. I’m lucky to end up in a city with amazing opportunities for musicians. Before I used to write songs and produce them in my home studio and publish them online and have been an underground artist. Here I’m more of a performing artist, singing not only my own songs but at my gigs, I also sing Iranian folk songs which I didn’t do before.

Lacuna: What inspires you and what are you working on right now?

Farzane: I think I’m in a new stage of my life, I’m settled in Glasgow. It’s time to shape my life in a new way and use the freedom and opportunities here and make improvements in different aspects of life. I’m thinking about gathering folk songs of Azerbaijan and make a new album, recording old traditional songs in a modern style.

Lacuna: Today, how do you feel about the country that raised you?

Farzane: I still love it and miss it. It’s my home, but it´s politically in the worst situation. I want the best for my country. Will I be back to live there? I don’t know. I’ll definitely go visit constantly if things change for good.