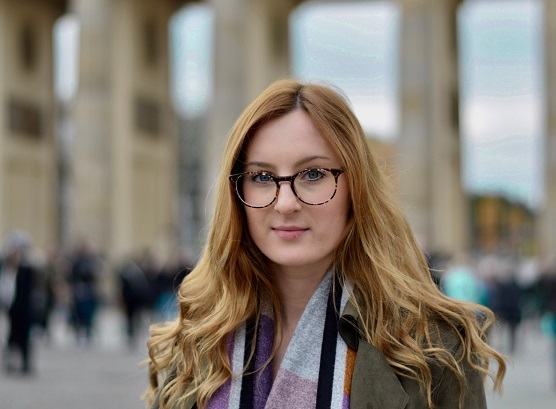 Anna Staroselski is the Vice President of the Jewish Students Union Germany. The JSUD was founded three years ago as the successor organization to the Union of the Jewish Students in Germany. Its work focuses on two areas. For one, the network between Jewish people ages 18 to 35 in the Jewish community. “We hold talks with the communities to ensure that Judaism in Germany remains alive. Without young people, there may soon be no more Jewish communities,” Anna says. Another focus is on social issues and topics that move young people, whether Jewish or not. “We want to be a loud young Jewish voice in society and make the diversity of Jewish life visible.”They try to create a positive narrative with workshops, discussions, and events.

In September, Jewish women from all over Europe come together in all their diversity to discuss self-determination and feminism among other topics.

Anna: 2020-2021 is the year the Jewish community celebrates 1,700 years of Jewish life in Europe, which means that Jewish life on this soil is older than the Federal Republic of Germany.

And despite everything, Jewish heritage is above all else a history of exclusion.

Anna: The Jew was always considered a stranger. Especially in the Middle Ages until the founding of the State of Israel, Jewish people were considered as “the homeless.” They have always been the stranger. They have always been special. They had their own rituals.
An example of this is the rumor of the poisoning of the wells in the Middle Ages, which we can also hear today in the context of Palestine. It is said that the Israelis allegedly contaminated the water. This is an old conspiracy theory that is now coming back.
There are a lot of rituals that must be done in Judaism. For example, you have to wash your hands several times before you eat bread out of respect for the food and for the meal. Judaism believes that God provides the food of the people. In the Middle Ages, this was a difference to people who did not have such rituals. the middle Ages is not known as the most hygienic time in human history. That may be one reason why fewer Jewish people were affected by the prevailing diseases.

When students hear about Jewish life in Europe, they hear mostly about such rumors and the exclusion as well as the role of the Jew as a victim.

Anna: This is something that we, unfortunately, have to criticize. The narrative of history always portrays the Jews as victims who have experienced anti-Semitism, who have always suffered. People talk about the period from 1933 to 1945 and then perhaps about the Israel-Palestine conflict. But very little is said about how Jewish people have shaped German society– how many artists and scientists were Jewish. There are a lot of Jewish women in Germany and Austria who ran their salons and had interesting personalities.

Even if the issue of exclusion and the role of victims are the main focus here, what do you think about Germany´s culture of remembrance?

Anna: I have been traveling a lot lately, and I have to say that the German culture of remembrance is very strong. Especially as the “perpetrator country,” I think that Germans have dealt with its own history incredibly well and recognized the mistakes. I have respect for that.

The problem is, with the increasing historical distance, you must ask yourself how you manage to make the topic relevant for today. How do we manage to make future generations more sensitive to what happened? Soon we will no longer have the opportunity to talk to survivors.

I was on a delegation trip to Auschwitz on January 27, organized by the World Jewish Congress and one of the survivors said, “Today, 75 years ago, Auschwitz was liberated, and I cannot say that I will be here at the next ceremony.” This has affected me deeply because it means that we have a great challenge and even greater responsibility.

I do not believe that today´s generation is to blame. But it has a responsibility not only towards Jews but toward all minorities. You have to keep your eyes open and show solidarity with people, and if you see injustice, you have to intervene.

The JSUD started a campaign to show solidarity with the Uyghurs who are oppressed in China. The campaign is called “Never Again Right Now,” because we have heardthis so many times from people those words, “Never again,” in connection with the Holocaust. But this must also mean something and must not just remain in the Jewish context.

There are genocides. There have been various genocides in the past. We have to learn from history. We are committed to this, and we would like to see more people intervene when injustice occurs.

Take the coronavirus. It shows how quickly exclusion and xenophobia can develop. In Italy, signs have been put up at restaurants that deny entry for Asians. It is a reminder of the past. Once you are afraid of something, it is projected easily onto a certain group of people.

Anna: What is happening with the coronavirus is catastrophic. It´s absolutely dangerous, and that´s exactly what I mean. “Never Again” means not only looking back and saying that everything was bad, but it is also looking at the present and seeing what is happening, wondering how it can be that people are excluded and not welcome in society.

We live in a globalized world, and that must not be allowed to happen. We have much more responsibility for one another. We must be there for people and include them.

Anna: The Jewish organizations have no contact with the AFD. We, the JSUD, have of course also decided not to communicate with the AFD. We do not want to serve as their justification. We don´t want anti-Semitism in the ranks of the AFD to be washed clean through us. I do not believe that all AFD members are anti-Semites, but the political party offers such people a platform. Ethnic thinking, racist thinking, and anti-Semitic thinking, that´s all found among the members and people who think like that feel politically at home in the AFD.

I read that there is a group called “Jews in the AFD.” What do you think about that?

Anna: It must be said, that Jewish people are very diverse. Of course, there are also Jewish racists. I think they have a problem with their Muslim fellow citizens, and they feel that the AFD has taken them seriously in their concern. Because they say that Muslim anti-Semitism is a danger that is not sufficiently addressed. But the AFD is not a solution to this problem. It simply cannot be ignored or tolerated that the thinking of the AFD is inhumane.

Are you worried about the rapid increase in AFD voters?

Anna: I believe that AFD has managed to understand today´s society. They are very strongly represented on the internet, and unfortunately, the parties of the middle have not yet understood the extent to which you can reach people online.

The AFD knows how to use its social media channels well. They can get their propaganda out, and they have a very emotional debate, which is smart on social media because you have a wider reach then and more people are responding. But I think that the majority of people don’t give in to the AFD. I believe that the majority of society is democratic and enjoys diversity in Germany.

I think that the parties are too passive. It´s not about saying anything against the AFD because it draws attention to them. It´s about creating your own positive momentum. Unfortunately, our politicians have done very little in this area in recent years.

Anna: There is no point in being reactive. You have to present your own content. I think that´s precisely the difficulty with the parties of the middle. They try to jump on topics.

Twitter is such a good example. The parties talk about the hashtags which are currently trending. But you have to put your own agenda on the foreground so that people know what a party is standing for.

What one can see right now is that people are not tired of politics, they are tired of the parties.

Has anti-Semitism increased in society since 2015?

Anna: I find it absolutely shameful that people blame anti-Semitism on the refugee “crisis,” because it has nothing to do with that. There was Muslim anti-Semitism before that. We can see anti-Semitism in schoolbooks in the Palestinian territories. That is education. They get educated to hate Jews and to hate Israel. If you grow up with a certain image that you are taught at home and at school, you have no opportunity to critically question that image.

The JSUD is also trying to build an interreligious dialogue. We have talks with individual Muslim people, and depending on how they are connected to a community, this conversation can expand.

Tell me more about your work.

Anna: We are planning the Jewish campus week for the second time this year. This is a week in which we are represented at universities throughout Germany. We are planning projects and discussions about Jewish culture. We explicitly exclude anti-Semitism and Israel and instead talk about positive things. We are working with Jewish organizations, too. Last year we invited rabbis to show people how to write the Torah.

Our goal is to show how diverse Jewish life is and how different Jewish identities are. And we want to show that Jewish students have the same concerns as non-Jewish students.

After all, religion is not a complete identity, but only one part of it.

Anna: The debate about what being Jewish means is discussed intensely in the Jewish community. Is it a religion or ethnicity, and how do you find this out for yourself? There are also a lot of Jewish people who are not religious, but they still feel Jewish. So what makes them a Jew? It is definitely a part of identity.

How do you define your Jewish identity?

Anna: I am very traditional. I celebrate the Jewish holidays with my family. I like to learn Jewish texts and the Torah, and I enjoy debating about them. It is a very big part of my life. I am also very proud to be Jewish. But I was born in Germany. I grew up here. I feel a part of this society, and I want to contribute to it.

I think Israel is great, and I like being there. I am glad that the state exists, but I don’t see it as my home.

Even today, there are still people who try to hide their Jewish identity and who are ashamed of it. There is nothing to be ashamed of. It is simply a part of life.

Is there a fear that makes them hide it?

Anna: I am friends with many people who are religious, and they would not necessarily let Tehri children go out on the streets with the Kippah. They say that they want to prevent something from happening, and that is why they don´t openly show themselves as Jewish.

It shows what kind of society we live in.

Friends of mine live in Wedding (a district of Berlin), and I was their guest. The parents would say, for example, “If you sing Jewish songs, don´t sing too loud. We don´t want the neighbors to hear you and know we are Jewish.”
It´s a feeling you live with, and it´s sad.

Nevertheless, I personally feel safe in Germany and I am not afraid. I hope that Jewish life will become normal in a diverse society one day soon.