Skip to content
„For Ireland, our heart and soul is in Europe, and we are staying.“

„For Ireland, our heart and soul is in Europe, and we are staying“ 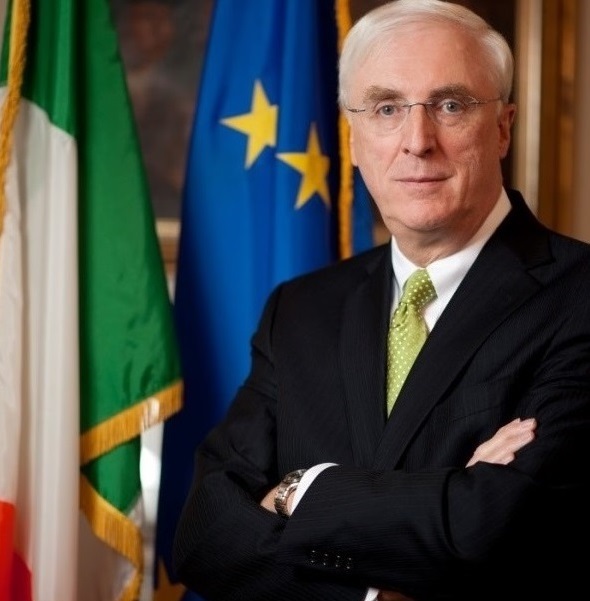 “The heart and soul of Ireland is the people of Ireland,” Ambassador Michael Collins says in the beginning of our interview. The heart and soul of Ireland is welcoming, friendly, and laidback. That is how I was greeted when I arrived at the Irish Embassy for the interview. The atmosphere is different from other embassies I dealt with, and it´s obvious right away that the people who work here love their country and have a deep respect for the man they work for. Michael Collins accomplished a lot during his career. He participated in the peace process that established the St. Andrews Agreement in 2006 and was named “Diplomat of the Year” while serving as Ambassador in the U.S. Talking to someone with such an impressive background can feel intimidating, but Ambassador Collins is easy to talk to, and more so, fascinating to listen to. The conversation revolves around the Northern Ireland conflict and the current situation of Ireland in the light of Brexit.

The Heart and Soul of Ireland is the people

Collins: The people of Ireland define us. They are us, and they represent the character of our country. Ireland has very deep roots. The heart and soul of Ireland is an accumulation of our cultural, our historical and our political experiences. Ours is a rich history, it´s a complex history. At times, it´s tragic history. It’s also a history blessed with many successes.

The Ireland we have today is a blending of all that and of today’s modernity. Many Germans see Ireland in very traditional terms, but Ireland is also a country which is today a very liberal European democracy. Ireland is obviously and proudly very Irish place. But it is also a very European place. That sense of Ireland wanting to be a part of the European family is very strong. You could see that again in the recent European elections. There is very steady and strong support for Europe, and it has become even stronger.

Collins: It doesn´t take a great deal for an Irish person to talk about 800 years of British rule in Ireland and the years until we achieved our Independence in 1922. There were several occasions over the centuries when Ireland sought its right to be an independent country.  However, when Ireland gained its independence, Northern Ireland choose not to be a part of united Ireland. Therefore, today Northern Ireland is part of the United Kingdom.

The division of Ireland has, of course, caused many difficulties. There were troubles in the 1950s which became more extreme starting in 1969. Thereafter, we had 30 years of conflict which saw the loss of some 3,500 thousand people in Northern Ireland alone. There were also some 40,000 casualties. That is a lot of people and a great deal of loss and pain in a small place. In 1998 the Good Friday Agreement was signed which brought peace to Northern Ireland.

Collins: The agreement was very difficult to achieve and, of course, no agreement was possible while the killing was still taking place. We had to have the IRA cease fire in 1994 as a necessary element to allow people to sit down together. International involvement and support through the American Administration, in particular, was crucially important leading to the eventual appointment of Senator George Mitchell to chair all-party talks. The agreement we reached involved quite a lot of compromise for everybody The sad part is that it took 30 years for it to happen, but we are very proud of the fact that, ultimately, and somehow against the odds, we did achieve an agreement that has been working, however imperfectly and however incomplete. As a result, we have experienced a period of sustained peace in Ireland over the last two decades.

Involvement in the peace process

Collins: Working with then Taoiseach Bertie Ahern, I was deeply involved in the St Andrews Agreement of 2006, which addressed many issues not fully covered by the Good Friday Agreement. In 2002, the Good Friday Agreement was in difficulty following the collapse of the power-sharing Executive government in October that year.  At that stage, I was responsible for relationships with London and Northern Ireland.  The Agreement collapsed because there was a serious lack of trust and lack of confidence in Northern Ireland.  We spent four years trying to address these issues, which included the necessary decommissioning of IRA weapons and the cessation of IRA activities. People needed reassurance that peace was a reality. The St Andrews Agreement allowed the Good Friday Agreement to be restored and the power-sharing Executive government in Northern Ireland to function again in May 2007.

Collins: We are not only proudly Irish but also proudly Europeans. Brexit for us is a very difficult development. We did not ask for Brexit. Our country is doing very well economically, but Brexit poses risks to our economy. We are almost back to full employment in Ireland after difficult years.

We are also naturally concerned that Brexit could see a return to a border on the island of Ireland – and that would be a disaster for us. The Irish Government and our European friends have been very clear that we don´t want a border reestablished on the island of Ireland. That is why we negotiated and agreed with the UK what is the “ backstop”. The backstop is a vital part of the Withdrawal Agreement, which is the basis on which the UK was supposed to leave the European Union.

The backstop assures that the border on the island of Ireland will never become a hard border again. This border is 500 kilometers long and goes from the northwest of Ireland to the northeast but since the 1990s that border has not existed. There was never a border for people. Irish and British people could always travel between North and South in Ireland and between Britain and Ireland – no passports, no controls. Since 1993, we have had the Single Market of the EU. So, as a result of that, there is no border for goods. Then, in the years after the Good Friday Agreement in 1998 and the consolidation of peace, we were able to remove all the security infrastructure. So, when you go to Ireland today, there is no border. We need an insurance policy to keep the border nonexistent as it is now – that insurance policy is called the backstop.

Collins: Sometimes people don´t realize that we have a very different view of Europe than the British. At the moment, 90% of people in Ireland support the European Union. That is a lot of people. We believe in Europe. We believe that the EU is the best means that we all have to assure peace and guarantee the wellbeing and prosperity of Europe and its peoples. For Ireland, our heart and soul is in Europe, and we are staying.