Skip to content
„It does not happen to a few children but to many children.“

“It does not happen to a few children but to many children.” 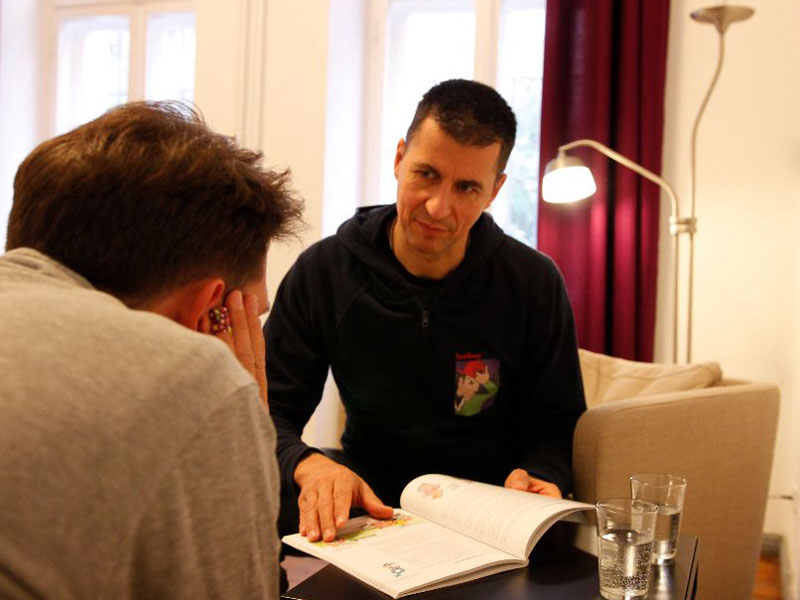 Sexual violence and abuse can affect everyone, not only girls and women. When we talk about equality, we often forget, that it is not only about girls’ rights, but that boys need the same rights that girls so naturally have: being allowed to be vulnerable and sensitive and having the same need for help and protection.

Berliner Jungs (Berlin Boys) is a project, based in Germany, for boys who are threatened by or have experienced sexual violence. Prevention and consulting are the main parts of their work. We talked to Roman Löffler about their work and the right of boys to live without the experience of sexual violence.

Every fourth boy has the experience of being sexually approached by an adult. Most of these boys are between 8 and 13 years old, when boys begin to move around outside their families, or are active online, without parental control. “Online boys are visible through pictures. Many want to become a Youtuber and upload videos that show their faces. Adults can react to this. Since these videos have certain themes, there is a topic for a conversation right away,” Roman Löffler explains.

In real life, the sexualized approach happens at places where boys roam without a supervisor, such as playgrounds and soccer fields, or the gaming section in a store. The approach begins with an ordinary conversation about supposedly mutual interests, but not every time an adult talks to a child the interaction has to be judged as a threat.

Ultimately, the reasons for the approach has to be questioned. Some people are friendly, some are lonely, and getting in contact with children is easier for them than with adults. We cannot put people under general suspicion. Most social contacts are useful and positive. We don´t want children or parents to become paranoid. Is the contact respectful or is it invading the personal space?

Berliner Jungs educates boys to question the situation they are in and to question the motives of the adults. “When we ask children what can happen if they give their phone numbers they always answer that the person can locate them. It is a James Bond kind of thinking. Then we tell them that it is not about locating them, but about the messages the adult sends them.” It is about building a friendship, sending pictures, getting pictures back and eventually asking the child to meet with them.

The unchecked access to the child is a problem. This can happen through WhatsApp or e-mail. When children live in a family with a shortage of emotional or material attention, and another adult listens, makes gifts, then a relationship develops. The next step is to get face-to-face contact with the boy and remove him from the secure family system.

Prevention does not happen when parents try to keep their children aware of any harmful experiences. Healthy prevention is about strengthening the child mentally and emotionally so that the child knows the difference between a nurturing relationship and a hurtful one.

“First of all, parents need to respect the physical boundaries. Physical violence weakens the power of resistance. When children experience sexualized assault they feel guilty and they need a lot of trust to open up to adults. Often the experience collides with the idea of honor. This makes it difficult for the boys to verbalize what happened since they fear they’ll get punished by the parents. Parents have to position themselves clearly beside the child and have to tell them they love them and will make it through together.”

Being brave and vulnerable

The common idea about men and boys is that they have to be strong, and seeking help after having experienced sexualized violence can be read as a sign of weakness. “And that is the reason why boys have difficulties talking about what happened. When a boy is 12 or 13, or even older, then there is the risk of having his masculinity questioned and being ostracized.”

Often these boys become the victims of mobbing. Roman Löffler remembers the case of two boys who experienced sexualized violence by the ages of 13 and 14. During the trial, they were already 16. “They had the look of typical teenagers and then the judge said to them; since they took the money they could be named boy prostitutes. I don´t think he would have said something like this to two girls.”

When a girl becomes the victim of sexualized violence solidarity arises. Mothers, family members and friends stay alongside the girl. “Women are threatened by sexualized violence up until old age. It is different with boys. Boys are threatened up until puberty, but the more they become men, the less they are victimized. That is why the solidarity between father and son is not as strong as it is between mother and daughter. It is another reason why boys often don´t entrust themselves to another person.”

Vulnerability as strength. We come across the sentence more often in recent years, but mostly in books and conversations between women. Accepting that being vulnerable does not equal being weak, that is something not only girls and women need to learn.

“The conception of men has to be less one-dimensional. This also means that women don´t need the strong men anymore. The strong men require weak women. I think in the same degree as the image of women integrates strengths, the image of men can ease up.”

“For many children, it is really special that adults talk with them in an open and relaxed manner about sexuality. It is often difficult for children to talk with their parents or teachers because of the closeness.” This is the advantage of Berliner Jungs. They come to schools for their educational work, spend a limited amount of time with the boys and then leave again. “The boys are not confronted every day with what they told us and the questions they had.”

First, the children learn the basics. How to name body parts, how reproduction works, how to talk about sex. “Once we have a common language, we talk about the particular case of sexual violence and about how to spot the warning signs and how the children can protect themselves.”

The approach is a creative one. Berliner Jungs uses a poster with a road that symbolizes the situation and together with the children they try to find ways out. Roman Löffler has worked 12 years at the counseling centre, and a lot has changed since then. Therefore, they have recently updated the poster. In the beginning, the threat was a male adult.

We try to make it more abstract and show that it doesn´t matter if it´s a man or woman, an adult or a young adult, or even a peer who is stronger.

The main goal is to raise awareness for dangerous situations and find ways out before the sexualized violence can happen. “When a child is affected by sexualized violence, they often have the feeling they are the only ones. That´s why it is so important to discuss the topic and to let the child know that it does not happen to a few children, but to many children.”

Berliner Jungs lets the boys know they are not alone and gives them back the trust in adults, and in men. “When a girl has experienced sexualized violence nobody would think to send her to a male counsellor or therapist. It is different with the boys. Since the perpetrator is often male and they are confronted with a new male adult, they have to learn to differentiate. They can´t think that all men are evil, because then they would ostracize themselves.”

Berliner Jungs stabilizes the boys by finding out what kind of positive experiences they wish for and what fears and questions plague them. Not always do the boys speak about the violence they experienced, but to help and rebuild their confidence and trust in people, this is not necessary. “We communicate that we have time for them, give them attention and they don´t have to pay with sex for it.”

We believe you, we are here for you, and you can trust us. This is the message which every child, no matter if boy or girl, needs to hear after having experienced sexualized violence or any form of traumatic experience.

First and foremost, it is the family that should provide the emotional and physical security. Berliner Jungs steps in where families need help. Roman Löffler wished they could reach more children in the future. “Whether or not a child gets prevention arbitrarily, it depends on the school, the teacher, the headmaster. We hope that every child will get a preventive course during their school days.”

Though Roman Löffler speaks about children in Berlin, this should be a worldwide goal: Not to focus on the healing work once the sexualized violence harmed a child, but to help the children to distinguish between a harmless approach and a harmful one and to teach them to set healthy boundaries and protect themselves when alone.