Sam: „As journalists it is our responsibility to monitor the power of the government“ 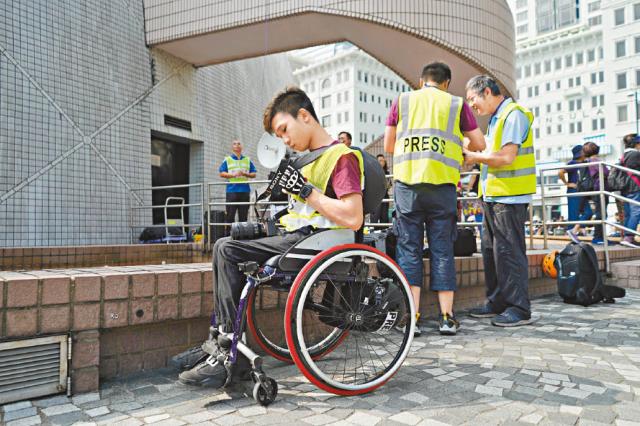 Sam Lo is a 23-year old journalist and photographer from Hong Kong. He is currently a student at The Hong Kong Polytechnic University School of Design and he is also working for the press and online media press of the university.

I found Sam when I was looking for someone who is documenting the protests for democracy in Hong Kong, this was shortly before the Coronavirus began to spread through China. There was something about the perspective of Sam´s photos that caught my interest more than other photographers and I was pondering to ask for an interview.

It was only after we did the interview that I learned why I was drawn to his pictures more than to others: We see the world from a similar angle. We see it from the perspective of someone sitting in a wheelchair. So I talked to Sam again and told him that after everything he told me I want to introduce him as one of Lacuna´s Real Life Heroes.

Sam was 6 years old when he was diagnosed with stage IV peripheral nerve cancer. He lost mobility in his legs and is using a wheelchair since then. He did not dwell on his losses, and when he was a teenager and his parents bought him his first camera he started taking pictures to show the world from his perspective.

Lacuna: Why did you start taking pictures?

Sam: I want to document the things that happen daily. In the beginning, I took random pictures since I had no idea what I want to capture on camera. Later I heard the term “street photography” and I began studying it. It is my style of photography up until now. I think being a journalist is similar to doing street photography because it both is documenting something that happens on the streets, even what´s happening in the society is seen in the streets. I became a journalist last year in August. I want to save important moments and seek the truth through photography.

Lacuna: How difficult is the job as a journalist for you in a wheelchair?

Sam: It is really hard to be a journalist in a wheelchair. I need to photograph and control the wheelchair at the same time. This is not easy, especially in the protests. I also need to pay attention to my surroundings because Hong Kong is like a battlefield during the protests.

On the other hand, Hong Kong is very disabled-friendly. We can go anywhere by taking public transportation. There is also a discount on transportation fees for disabled people. However, living independently is not easy for us because housing is expensive and cannot be afforded easily. So most disabled people are living with their family or at official residences.

Lacuna: Can you describe the atmosphere during the protests?

Sam: The streets have been a mess last year. We could see all traces of protests, like bricks and tear gas ammunition and broken railings. It looks like a battlefield.

Lacuna: Has there been a moment that impacted you the most?

Sam: There is a moment during the protests that I will never forget. Last October I was going to photograph and do interviews during the protests. Suddenly, the police advanced and shot tear gas at the protestors. So the protestors ran away but one of them stopped in the chaos and asked, “Do you need help?” I told him, “I am fine and I can take care of myself. It is very dangerous, you have to run.” The situation was becoming messier, so the protestor pushed my wheelchair and helped me to leave the death trap. At that moment I was really shocked as he may have been arrested because of me. Finally, he brought me to a safe place and went back to the front. This is very moving and unforgettable because we can see that the protestors are really friendly and helpful, as well as brave.

On the other hand, I experienced bad treatments from the police officers. I was shot at with pepper spray, tear gas and even the water cannon. I also think the police are always targeting journalists because they believe we are bothering their work, and even that we are protecting the protestors.

As a journalist, I think we carry out the fourth estate and it is our responsibility to monitor the power of the government. I think we do the right thing as journalists.

Lacuna: The protests have been interrupted by the coronavirus.

Sam: Actually, the protests are fewer because of the virus. But the focus is shifting to internet promotion. YouTube, Facebook, and Twitter share the news and updates. I think the protests have just stopped temporarily. I also want to mention that a little break is good to think further about the future of the protests. We know that it is a long fight for democracy. Now we need something to keep the passion.

Last but not least, I think the protests will be continued after the virus is contained.  “Five demands, not one less” is not just a slogan, it is our goal. I truly hope we can achieve an independent Hong Kong because it is the only solution to tackle all the problems in Hong Kong. Therefore, we have to fight for democracy. We have to win.

Lacuna: How is the situation in the city with the fear of the coronavirus?

Sam: The situation is still bad. Most people have not enough masks. Even elderly people reuse a mask for days. The Hong Kong government has no policy to deal with the problem of mask supply. Also, many people need to wait for 5 to 6 hours to buy a few masks. Some companies order the masks from a supplier and sell it at high prices to people who need it urgently. It is a tragedy.

Chinese Media is always saying positive things about the Chinese Government. They mostly mention that the situation is under control and they also underestimate the risk and severity. However, all we know is that the world is under a strain because of the virus. Therefore, Chinese Media is using propaganda and not telling the truth.

The five demands of the Hong Kong Protests are: For the protests not to be characterized as a riot; Amnesty for arrested protesters; Independent inquiry into alleged police brutality; Implementation of a genuine and universal the suffrage of both the Legislative Council and the Chief Executive, Withdraw the extradition bill (this demand was met)